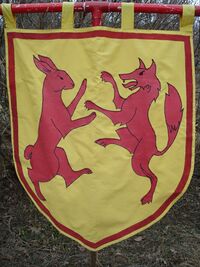 | devicecaption = Or, a coney and fox combatant gules within an orle gules |awards=

Gwillim Kynith has been in the SCA since (2001) AS XXXVI. He lives in the Shire of Endewearde, where he is the group's dance master and the captain of the North Tower Archery Company.

Today, Gwillim lives in the great Shire of Endewearde, geographic center of the East Kingdom. He has made a name for himself there as the North Tower Archery Company Captain and as a bard, the latter earning him a place in the Order of the Troubadour. Through his interest in dancing and a willingness to share that interest, he became Endewearde's Dancemaster and found himself named a Companion of the Order of Terpsichore. As a result of his participation, leadership, and courtesy, Gwillim was made the Seneschal of Endewearde, an office which he held for almost five years.

In recognition of his Service to the Shire of Endewearde and the East Kingdom, Gwillim was inducted into the Order of the Silver Crescent by TRM, Edward and Marguerite. For his skills in diverse arts such as music, stained glass, dancing, and brewing, TRM Gryffith and Aikaterine made him a Companion of the Order of the Maunche.

With his lady wife, Constancia de Vianne, Gwillim is a member of the household Ancaster in the Barony of the Bridge.