In the Freehold, Guðrún (Lady Rosie of Mountain Freehold) enjoys a variety of pursuits. She is heavily into Arts and Sciences (sewing, naalbinding, card weaving, a little embroidery, singing, playing violin, and belly dancing), and is an Underforester in her local Forester's Guild (with interests in wilderness travel/hiking, wildcrafting, medicinal herbalism, and natural dyestuffs). Guðrún has recently started learning about wool processing and spinning, with a focus on historical Norse practices and available materials. She has previously done rapier fencing and German longsword, and would like to someday get back to both.

Guðrún Sveinnsdóttir, more commonly called Rosie, was born in the early 10th century in Birka to a Norse pagan merchant father (Sveinn Barðison) and Celto-Germanic Christian mother (Geila Marie Widuapfel). Sveinn and Geila met in Hedeby, on one of Sveinn's early trading expeditions. She came back with him to Birka, where his family lived. Sveinn continued trading, but after a time moved his operations to the Volga trade routes. Sveinn and Geila had several children. Guðrún's older sister Brígiða (by 11 years) was their first child. When Brígiða was 15, she traveled with her father to Baghdad and married the Abbasid Persian trader Hakim ibn Zuhayr. Olafr was born 3 years after Brígiða, and is currently working the trade routes with his father. The next two brothers died young (one from illness, the other from accident -- Guðrún never met one, and barely remembers the other). Two years after Guðrún was born, her parents had another son, Bjorn, who was apprenticed to the local blacksmith as soon as he was old enough to swing a hammer. When Guðrún was 6, her mother died in childbirth, & her father took Guðrún to live with her sister in Baghdad. She spent the rest of her childhood there. Among the many other things she learned in Persia, Guðrún fell in love with the local dance forms and music. As a play on her name, some of her friends nicknamed her "Gulrun," which means "essence of rose" in Persian. (Later on in the Knowne Worlde, this was translated to "Rosie," which is her most commonly used name today.) When Guðrún was 16, her father brought her back to Birka to take care of her paternal grandmother Amma Hildr (a healer and volva), who had retired from her traveling work. In their time together, Amma Hildr taught her granddaughter much of herbal and healing craft. While taking some food to her brother Bjorn one day, Guðrún met the local blacksmith, Thomas. They fell in love and were married. Eventually Bjorn married as well and took over the forge, and his wife Ásleif took over caring for Amma Hildr. Now free to travel, Guðrún and Thomas found the Knowne Worlde and settled in the Shire of Mountain Freehold. 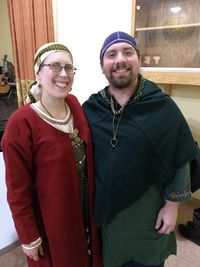 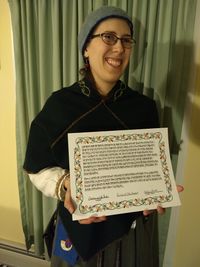 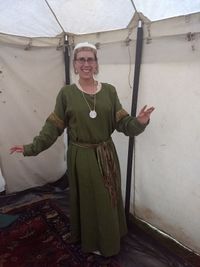 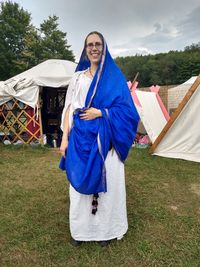 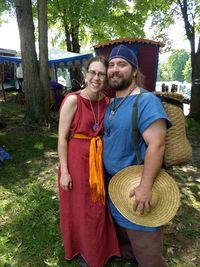