My mundane name is Jason C Peck. I first joined MSR (Kingdom of Acre) in the summer of 1989 and shortly thereafter joined the SCA as well. I was introduced to both by my brother Sir Richard fitz Richard Blackmoore (James Arthur Peck). I am squired to Sir Jehan le Batarde (Ira Robinson). After taking a short 25 year break from the game from 1994 to 2019, I am now back participating in the society as part of the Surtr's Brood household.

I, Gilbert Christian Blackmoore (aka Gilchrist Blackmoore) was born around 1250 near York in the borderlands between Mercia and Northumbria. As a young and fiercely independent Anglo-Saxon, I renounced Norman rule and left England to go on adventure and joined the Varangian Guard in the Byzantine Empire as had some of my ancestors. However, I found the guard to be a shell of it's former self, a result of the sacking of Constantinople in 1204 during the 4th crusade. After a short period of time in the guard I grew disillusioned and returned to England. Still wanting to seek adventure outside of England I joined Edward Longshanks in the 9th crusade in 1271, eventually reaching Acre in his service. I returned to England with Edward to see him shortly thereafter crowned King of England. Though occasionally called upon to return to service, including the conquering of Scotland in 1296, I again grew disillusioned, seeing the corruption and greed that drove these conquests, and am attempting to live out my life in penance for my sins in my original homelands near York, doing my best to resist any further calls to arms by Longshanks in his end-years.

I hold no offices or positions.

While I have certainly helped out at events, especially at Sands Point in the old MSR days, I have never done so in an official capacity.

I constructed most of my armor, my pell, several thrown weapons targets, my thrown weapons spear, all of my own garb and I am working on making my own CA crossbow. I also helped my daughter with her armor and some of her garb. I am currently working on my first A&S project.

The Thrown Weapons Target I designed and built : 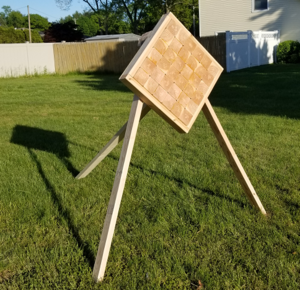 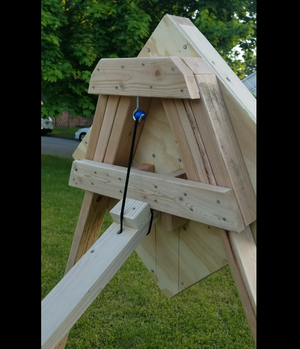 It is best to contact Baron Dankwert Bathory. I would rather not be contacted directly as I like surprises. Also, I would prefer to receive any awards in person once live events start up again. If you do need to contact me you can reach me at packofpecks@gmail.com.