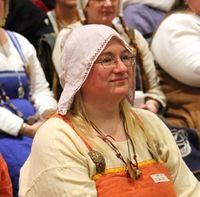 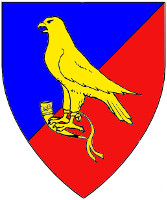 |devicecaption = Per bend sinister azure and gules, a falcon belled and jessed maintaining in its talons a drinking horn Or. |awards =

Edgitha Hlammandi is an older woman of mixed descent living in 10th century Sca holm (the town at the northern-most tip of the Shetland Islands north of Scotland, controlled and owned by Scandinavia at that time).

Edgitha lives in Sca holm (modernly known as Skaw, on the isle of Unst: https://en.wikipedia.org/wiki/Skaw,_Unst), which is a very northernly town or village at the very northern part of the Shetland Islands. She is the child of a Shetland native mother and a Scandinavian father. Her father was a warrior who eventually settled down to fish, farm, and raise livestock. She has a strong connection with the land, and is considered to be very wise by her neighbors.

Edgitha can be reached in several ways:

In case of an impending summons before a Court, please contact Hlífa Hrafnsdóttir ([1]) or Guy Todd ([2]). Edgitha has anxiety, but if one of her friends is with her, she will do fine.

For illuminators and scribes, and anyone else who has an interest, Edgitha loves the following: