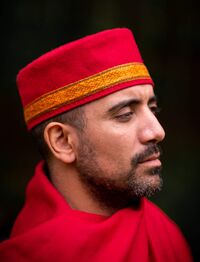 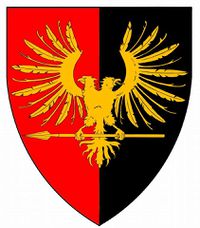 Lord Dimitrius Alexandros first discovered the SCA in Camp Lejeune NC with a group called Ravens Cove in the Kingdom of Atlantia back in 2005. Dimitrius started Fencing with the training of Baron Juan Carlos and often trained with the Shire of Cathanar of Atlantia. His first SCA event was the Peasants Revolt in the Shire of Cathanar in 2006 before Dimitrius was deployed again. Afterwards, Dimitrius and his lovely bride Svana Vefa moved to the East Kingdom where they were taken into a group called House Three Skulls, aka "Those people". Here Dimtrius learned more about Heavy list fighting and started his journey in heavy list fighting. While starting his Heavy list fighting, Dimitrius continued his Fencing on the fields of Pennsic fighting both Heavy and Fencing battles back to back. Soon Dimitrius accepted the challenge and the journey of becoming a Squire to Master Ruslan Novgorodcev and now resides with House Gleipnirvirki and is a member of the Hrafnox Fighting Unit for both Heavy and Fencing sides of battle. If you don't see Dimitrius on the field of battle, you can see him where ever his two children drag him to.

Dimitrius is a 346 AD Eastern Roman Army Infantryman. From the City of Byzantium, later renamed Constantinople, Dimitrius is a light infantryman and loves the field of battle. After the death of Emporer Constantine, Constantine divided his empire up amongst his three sons and now there's no lack of wars amongst the three and any outsiders.