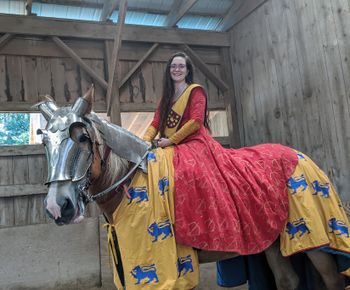 Generally she is fine with being surprised for awards, however, she would prefer a writ if a peerage were to ever happen. Since she makes garb, she would obviously need to make something fitting for the event. If equestrian can be involved, awesome. If not, coconut hooves are required. As for regalia, wreath, Gollar/cloak, and medallion would be lovely. The lovely Amalie von Hohensee has already volunteered to make me a stumpwork/embroidered wreath if I ever get there.