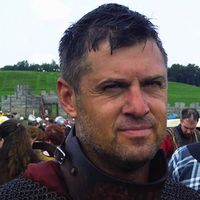 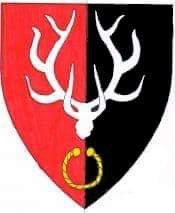 Badge for the Order of the Silver Brooch

Vindiorix Ordowik, or "Black Finn," of Preachain is a 1st Century CE Briton of the Ordovices Tribe from what is now western Wales. He served for a time as a legionnaire with Legio V Alaudae along the Rhine frontier and during the Batavian Rebellion of 70 CE. When he learned Rome was campaigning against the tribes of western Britain in 74 CE, he deserted from the legion and made his way back to defend his homeland. Four years later, in 78 CE, Rome successfully defeated the Ordovices and conquered Mona. Since then he has traveled across western mainland Europe as a member of a mercenary band called Clan Preachain (Clan of the Crow).

Please inform me if I need to attend court.

In mundane life I am Justin Davis, a career military officer and outdoors enthusiast. I dabbled in the SCA in college but only really became active starting in 2016 with the Shire of Mountain Freehold. I have been with Clan Preachain since 2006. This group is not SCA, although many of its members are, and it is effectively an SCA household.