As of June 2016, she resides in the Barony of Calafia, Kingdom of Caid, having moved there to be with Gieffrei at his Naval posting. 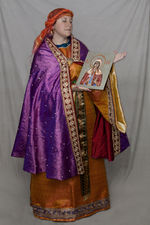 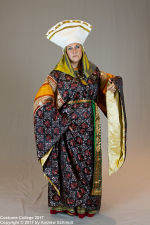 Anna is a lady born of a high-ranking Greek family living in Saracen-controlled Sicily around the 11th century. She was married to a lower ranking prince of the Imperial family by proxy and moved to Constantinople in her early teens. She was rapidly caught up into dangerous court intrigue, and after nearly 20 years of grandiose Imperial life, her husband was mysteriously killed while turmoil reigned during a shifting of power in the Purple. Being that her family was of an opposing political view to the Emperor, she was placed under house arrest and is confined to the grounds of the Great Palace Complex overlooking Propontis (The Sea of Marmara).

She was married to Lord Gieffrei de Toesni as a capitulation following the devastating loss to the Normans at Dyrrakhion. This accomplished getting her out of the emperor's hair, and appeasing the Normans for a few years.