Best known for writing & performing Music of the Modern Middle Ages, as well as Pyrography and other Visual Arts.

When not at her Isfahan Estates, Ajir resides in her fortress in the Caspian Hyrcanian Forest Region. She has a large library with works collected from around the world, and is a scholar of great enthusiasm. She composes and performs works of music and poetry, and fanciful stories of legendary places and heroes.

While Ajir has no particular objection to surprises, she walks with a cane and can be slow to get around. If she is not already at Court it may be wise to summon her in advance to avoid awkwardly long waits. 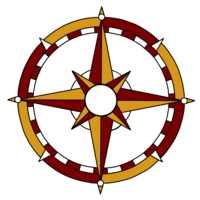 a compass star gyrony Or and gules, within and conjoined to an annulet quarterly Or and gules (A fanciful rendering)

Full Achievement of Arms for Red Lórien of Oak River