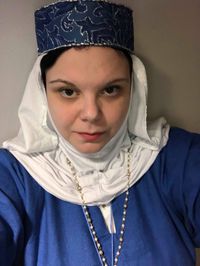 Agnes Marie de Calais (she/her/hers) was introduced to the SCA in the Barony of Bridge, University of Rhode Island group in the winter of 2003. She was active in fencing from 2003 to 2005 in the Qunitavia area. Life events led to a period of relative inactivity till 2010 in which she, her husband and then three small children participated again. Again life intervened and the family was watching from a far and waiting to return. 2018 has marked a renaissance of SCA activity for this family of six. Agnes is married to Damhin MacRonain. Their children are Isaac(Jay mundane) who is looking forward to heavy list in a year and has a Moroccan personae, Malcolm( Sterling mundane) who enjoys youth service, youth fighting and helping mom retain, Nathaniel and Barry.

Her main SCA pursuits are the bardic arts (spoken tales and poetic works with some singing, mostly from the English and Scottish traditions), researching topics of varied interest and writing about her findings and most of all she loves working with the Youth she is a Youth Officer at Large.

Agnes Marie de Calais was born in 1480 and is the eldest of three surviving children of a wool merchant. She and her two sisters were trained to be able to help with accounts, read and not only run a household but aid with various aspects of business. At this point in time Calais is under English control but her family privately maintains their French roots and have been merchants in Calais for as long as anyone can remember. Her marriage to a fellow guild member’s son was arraigned and she wed at twenty. She aides her husband in business accounts, reads and owns a book of hours, manages a modest sized household and being a mother of six herself aides in midwifery. She enjoys unique fashion and fabrics from around the world that find their way to Calais and sumptuary laws irk her. She is currently middle aged and living in 1518.

For more of her work both as an Art and Science Researcher and as a Bard please visit her website. agnesmariedecalais.com

Her main SCA pursuits are working with the Youth she is a Youth Officer at Large, preforming stories and poetry from as a Bard and most of all, her Art and Science pursuits in the field of research. She has completed and displayed two research papers on Japanese Field Heraldry in the late 16th century. She has researched Medici porcelain that was influence by pieces brought over from China in the late 16th century. This paper went from an A&S piece and project to a published piece in the Gazette. It then be came a quest to help determine further provenance. She has helped determine more about a Medici Porcelain cruet at the MFA Boston as well as resources relating to it held at the Massachusetts Historical Society. Ask her about researching and she will excitedly tell you why it can be fun!

In case of Court

Please notify my Laurel Mistress Raziya bint Rusa in advance if possible as well as my husband Lord Damhan MacRonan (Dylan Whitney), I am fine with accepting awards during Ethereal Court. Due to health issues planning for court is helpful.