Lady Ástríðr started attending local events in the early 1990's, with her husband, Alric the Younger. Mostly A Market Day at Birka and Legend's of Chivalry. Back in 2013, she decided to take her hobby to the next level by becoming an official member and hasn't looked back, since. She loves going to events where she can take a class on a craft or skill, that she wouldn't normally have access to. You can often find Ástríðr working on an embroidery project (or 3), helping Their Excellencies or helping find teachers for local events. At Birka 28, she was approached by Mistress Astryda Borowska and asked to become an apprentice. On May 27, AS 52, at Panteria XXII & King's & Queen's Equestrian Championships in Panthervale, Ástríðr officially became Mistress Astryda's apprentice.

Ástriðr is a Swedish woman from (roughly) the 10th century. She likes most things fiber related, especially hand embroidery, and loves to sing songs that her Irish companions have taught her.

Underforester of the East Kingdom Foresters Guild, The Forest of Stonemarche 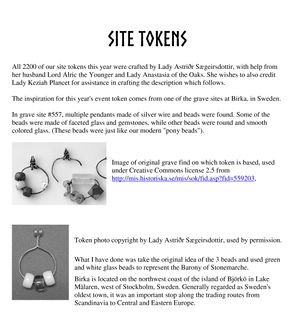